Manufacturing is the leading contributor to the Central Texas economy.

The area hosts some of the most advanced facilities in the world and possesses a strong, technical workforce. It is anchored by semiconductor, computer electronics, biotechnology, and food & beverage. While these companies account for 57,644 jobs, it is worth noting that more than one third of the major employers are manufacturers, including Applied Materials, Samsung, Freescale, National Instruments, Dell Computers, 3M, Hospira, and Flextronics. Manufacturing is among the most productive contributors to the regional economy. Manufacturing is 6.0% of total employment in Austin, but contributes 10.3% of total regional GDP—the largest share of any privately owned industry sector. Productivity, as measured by value-added per worker, is $193,696 in the Austin’s manufacturing sector, 73% higher than productivity across all industries in the economy.

Manufacturing is central to the performance of the region’s technology sector. In 2014, manufacturing companies added 4,089 jobs to the Austin economy, a 7.6% annual growth rate. Manufacturing’s job creation rate of 7.6% ranked second-fastest growing industry sector in Austin in 2014, adding jobs at a pace roughly 2.5 times that of the regional economy as a whole. Manufacturing was responsible for one out of every seven net new jobs created in the Austin economy in 2014—and approximately 83% of that job growth was in the Information Technology and Analytical Instruments Cluster. 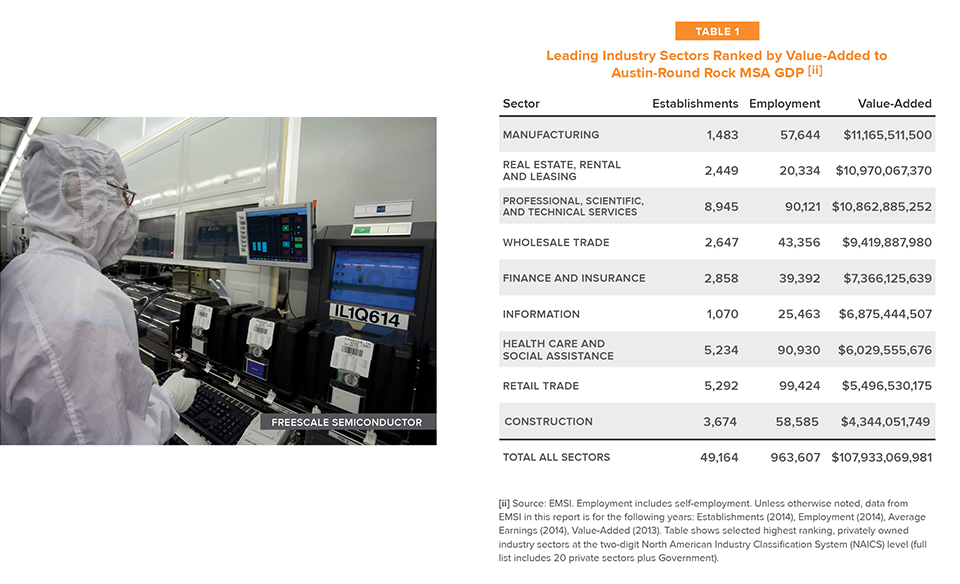 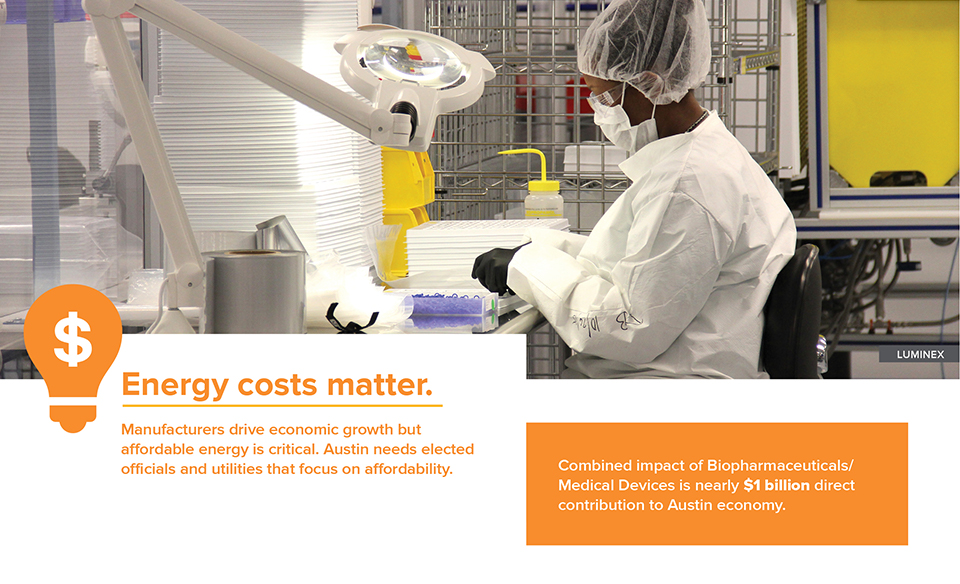 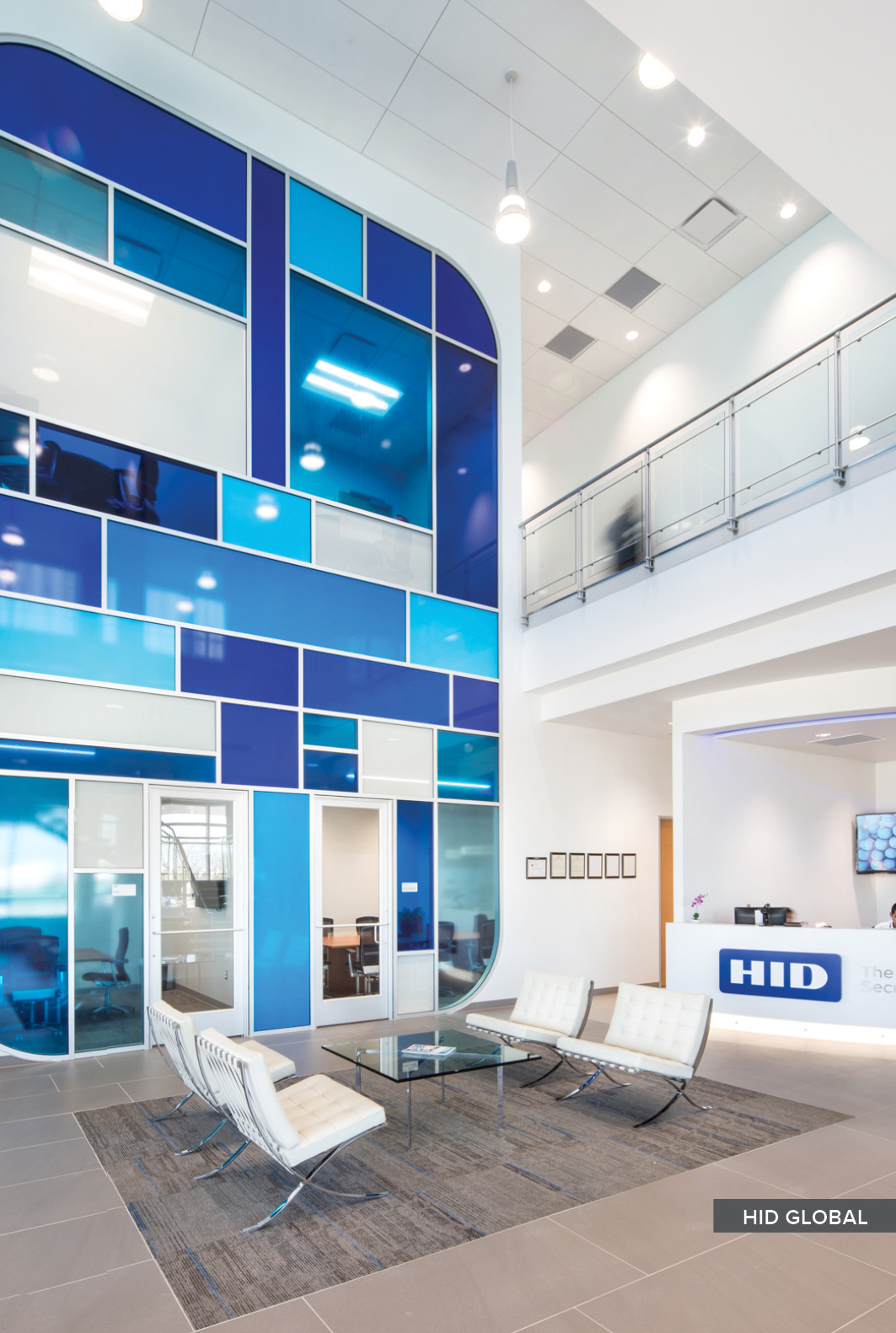 Austin’s manufacturing sector outperformed other major metropolitan areas in Texas, as well as state and national growth rates, in 2014. Manufacturing accounts for a smaller share of total employment in Austin (6.0%) compared to Dallas (7.6%) and Houston (8.2%), but was a much more significant contributor to job creation statewide than the larger metropolitan areas. Fifty-six percent of net new manufacturing jobs in Texas in 2014 were created in Austin. 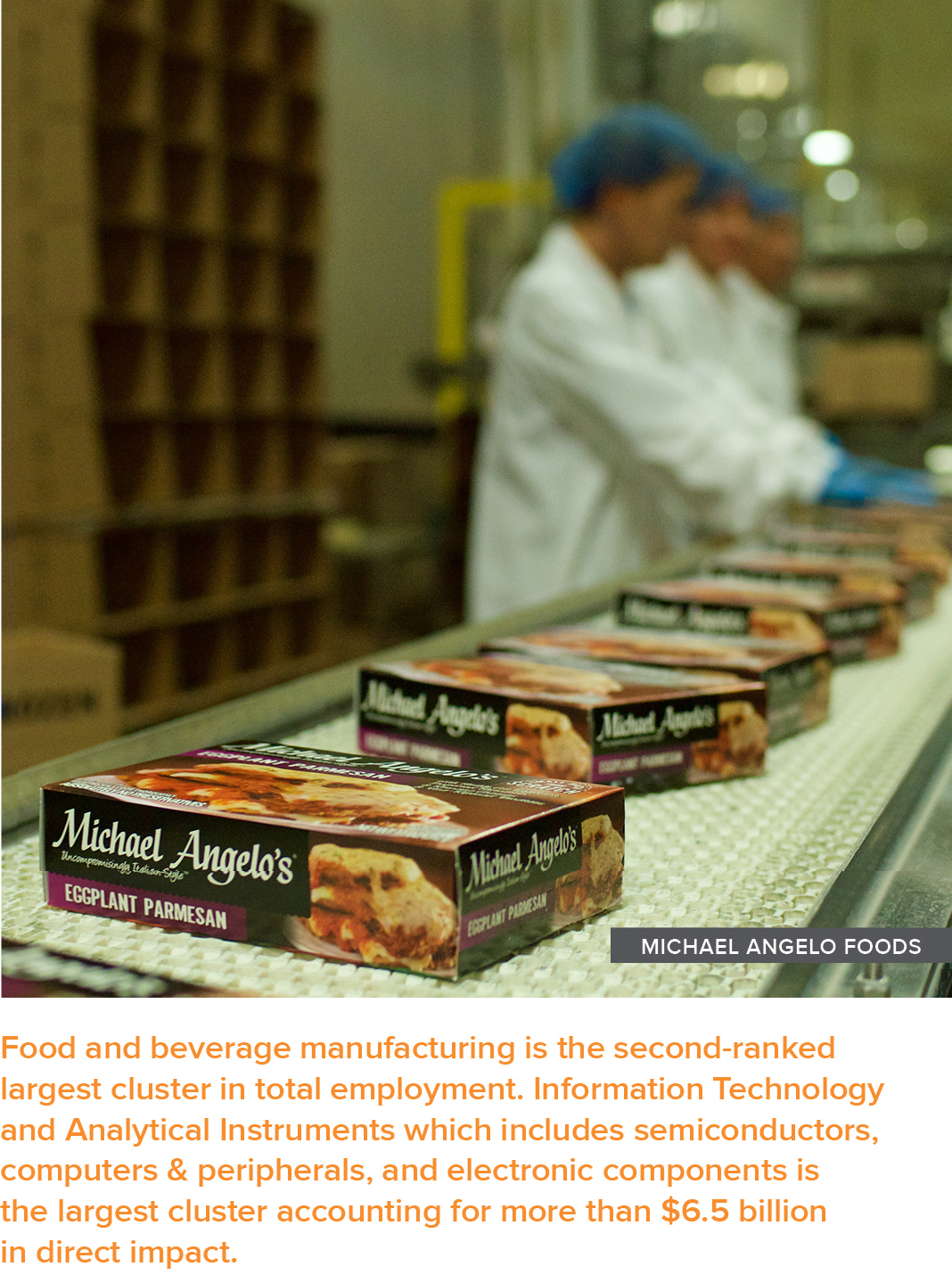 The tables (below) show manufacturing’s portion of each cluster, not the cluster as a whole. For example, manufacturing companies in the Austin-Round Rock MSA belonging to the Information Technology and Analytical Instruments Cluster represent 27,555 jobs, but total employment in the cluster is a much larger figure because it would include jobs at software companies, too. Earnings are also generally higher in the manufacturing sector compared to other industries in the Austin economy. Average earnings per worker, defined as total industry earnings divided by the number of jobs (includes wages, salaries, supplements/benefits, and proprietor income), is $106,089 for manufacturingin Austin, which is more than $45,000 higher than average earnings for the regional economy as a whole and the only industry sector with at least 10,000 jobs in Austin that exceeds $100,000 in average earnings. 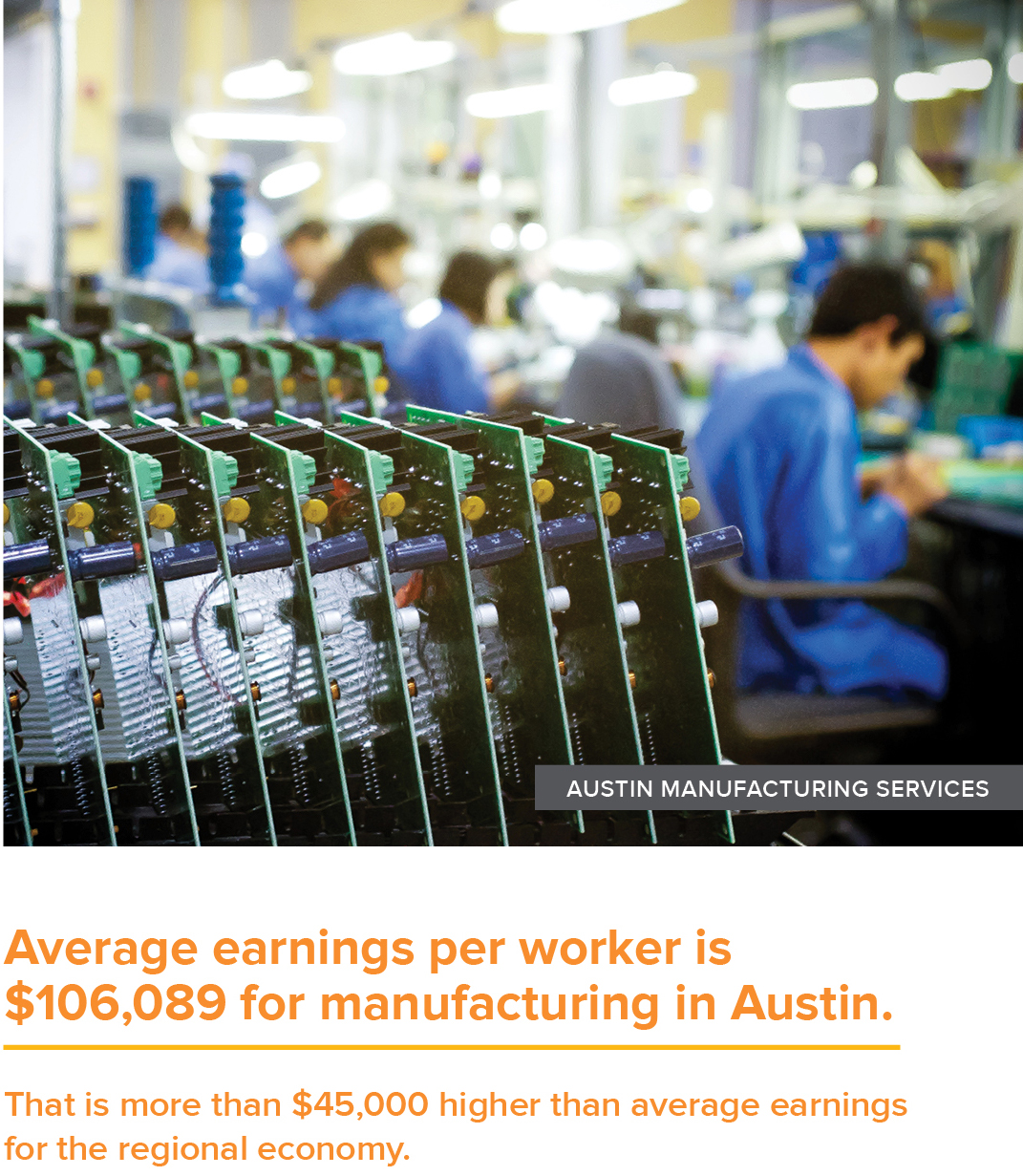 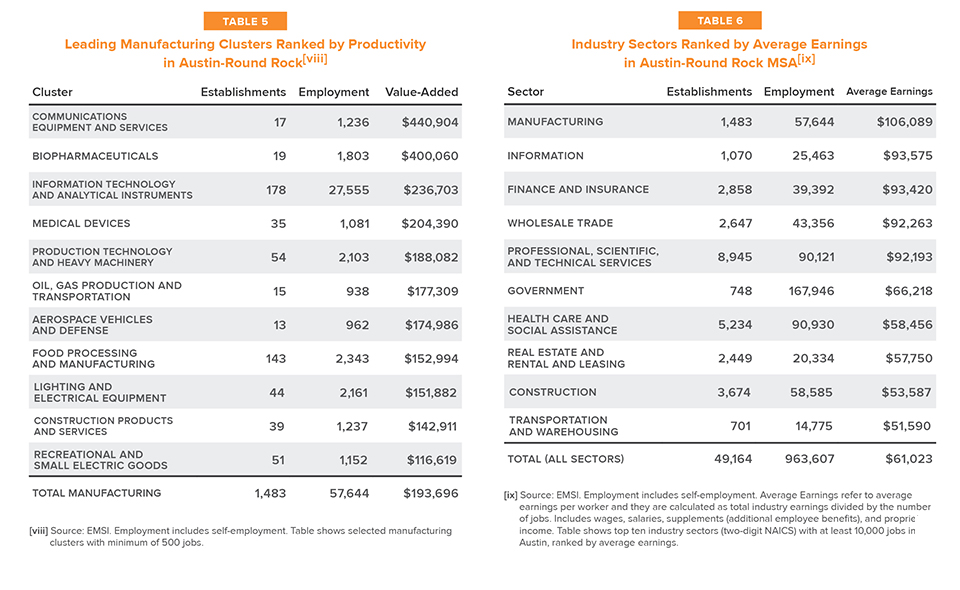 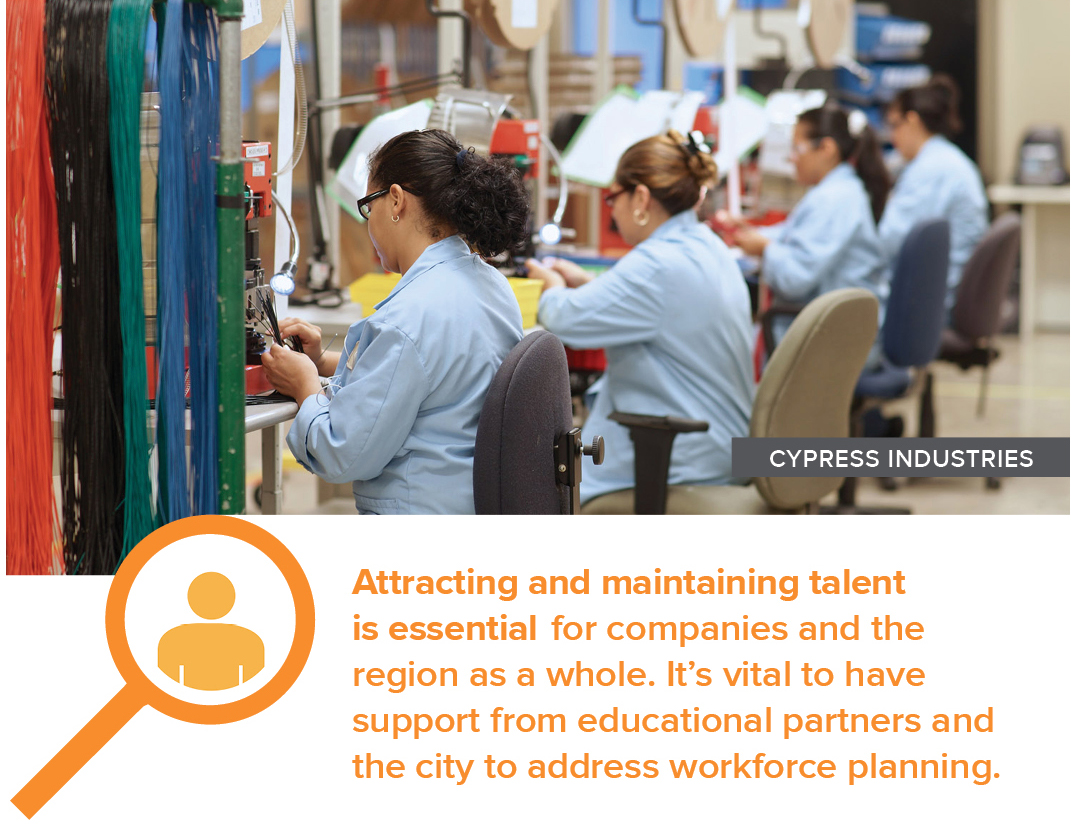 Manufacturing in the Austin-Round Rock MSA offers many living wage job opportunities to workers across the spectrum of education and training requirements. Table 7 shows the top ten occupation titles ranked by number of jobs at manufacturers in the Austin region. Six of the top ten occupational categories listed in the table require less than a four-year degree and pay median hourly earnings that are higher than what is considered a living wage in the Austin-Round Rock MSA for one adult ($10.97 per hour), according to the MIT Living Wage Calculator.

With the rising cost of housing in Austin, providing as many living-wage employmentopportunities as possible to local residents is an important goal for economic and workforce development, especially in areas of the region where educational attainment rates are lower compared to the population as a whole. Manufacturing should be viewed as a critical piece of the solution to many of the challenges—economic segregation and educational attainment inequality—facing Austin, and ARMA can play a pivotal role in driving public-private partnerships to address those challenges. 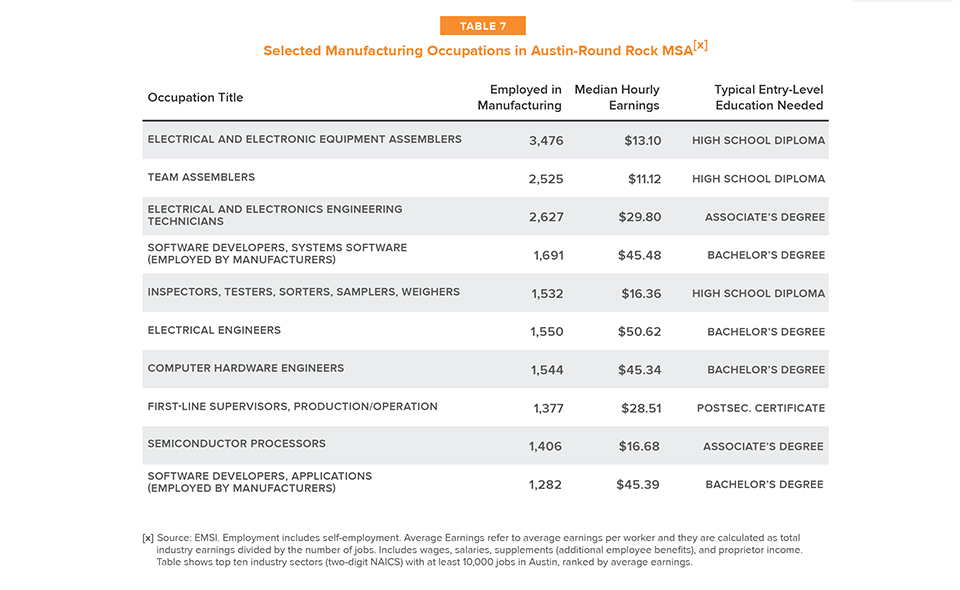